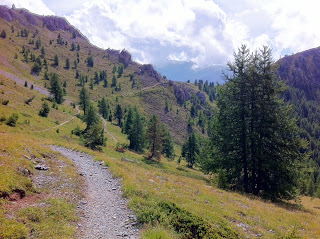 Inge decided not to walk this section so I did two days walking on my own and we met up on Thursday in Ceillac.

Wednesday was good weather again. A stiff climb out of Briançon that continued to climb steadily all the way to Col des Ayes at 2472m. Then a descent that ended up on a dirt road and e entually a paved road. This stage normally ends in Brunissard, but the gîte there was full so I went just a few minutes further to Larch where I stayed in a small gîte. Aside from a French couple who had their own room, I was the only one in the dormitory so it was quite comfortable.

Thunder, lightening and heavy rain on Wednesday night that became moderate rain by the time I set off on Thursday morning.

Thursday was one of those frustrating days with a climb and descent followed by a big climb. Every step of descent from the first climb must be made up on the second climb. The first part of the day normally has fine views but Thursday the valley was full of mist. The rain changed to a few showers and by late morning it started to clear which was good; climbing wearing rain gear is hot sweaty work. Once again a long climb. It finally leveled out and became scenic about an hour before the 2300m col Fromage (photo above). No idea where the name comes from, perhaps because the rock in the area is so crumbly. Then a 650m descent which the guide book described as on a trail of crumbly rock, but said could be done in 75 minutes! It turned out to be fine trail and a very quick descent.

Inge was waiting at a very good gîte, Les Baladins, and had enjoyed a mostly sunny day in the pleasant little town of Ceillac.

The two days were OK, but not remarkable. Inge didn’t miss much.