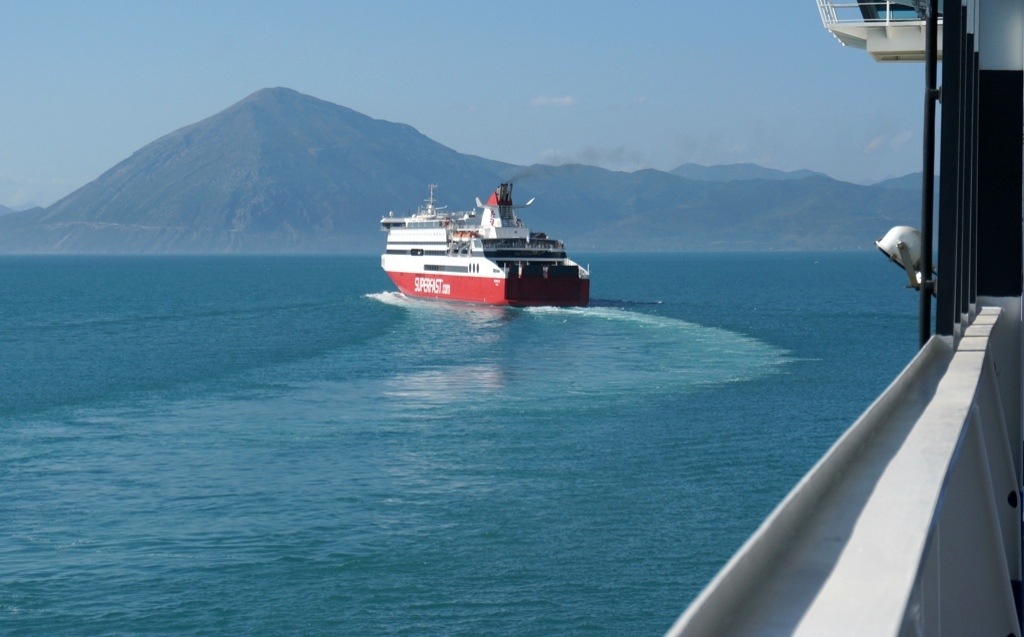 Thursday 2013.05.30. I’m writing this in the evening on the overnight ferry from Patras, Greece to Bari, Italy. End of my visit to Greece.

Another day of travel. The overnight ferry from Crete arrived in Piraeus (near Athens) at 06:00 this morning after a smooth journey and the luxury of a cabin to myself.

A warm sunny day with two alternatives to get to Patras: bus or train. It wasn’t clear that the bus would take my bike and when I discovered that the bus terminal was a longish ride in Athens traffic, I chose the nearby train station. But nothing is simple. The train turned out to be two trains plus a bus (the old rail line for the last part of the journey has been abandoned and replaced with bus service). The clerk in the train station said she didn’t know if the bus part of the journey would take the bike. Off I went on stage one, a commuter train across Athens. I asked a cleaner how many stops before I should get off. No English. I pointed to the station name on my ticket and she held up six fingers. Got off at the right place but no sign of my next train. The people I asked spoke fluent English and directed me to a station few hundred metres away. Another commuter train and very busy. Nowhere to put my bike – I found myself standing with it in a doorway area. Beside me was an older Greek guy with a bike. He spoke English and said many people would get off at the next two stops, then we could put both bikes against the door on the left side as it wasn’t used for the rest of the journey. We had a pleasant chat. Before he got off, he warned me that the bus driver would not be pleased to see my bike.

My fellow cyclist was right. My bike was refused on the bus. The bus driver spoke no English. He shook his head repeatedly, waved his hands and shouted when he saw the bike. I was politely insistent. The bus wasn’t busy and the baggage compartments were almost empty. In pantomime I said “look, it will fit here across the bus.” I pointed at the ticket and me and the bike and the bus to indicate that was the deal I expected. He looked closely at the ticket and realized I had come from Athens with the bike. He pointed silently at the front baggage compartment and walked away. I loaded the bike.

The bus trip was a scenic tour of small coastal towns. Replacing a train, the bus stops at the old towns the train once called at. With the Greek habit of leaving your car in the street rather than parking if you only plan to be in a shop for a minute or two, it was slow in towns for a large highway bus. I’m glad I wasn’t cycling those roads as the driver pushed to make up lost time.

The ferry to Bari is quiet. The busy season starts mid-June. I’m in a four bed cabin, sharing with two others. The two upper beds fold down as in a train couchette compartment. The sea is calm and I will sleep well on this 16 hour voyage . Tomorrow when I get up I will see the coast of Italy.

I enjoyed Greece. I liked the people, the history, the old parts of the towns, the food and the beaches. The countryside and mountains are beautiful. I will come back but without the bike. There is good hiking in Greece and bus travel seems easy.

3 thoughts on “Farewell to Greece”