We’re slowly getting in shape and after starting to feel like cyclists. We leave Christchurch and the east coast of the south island and head inland to Lake Tekapo. Distance 367km in five days. 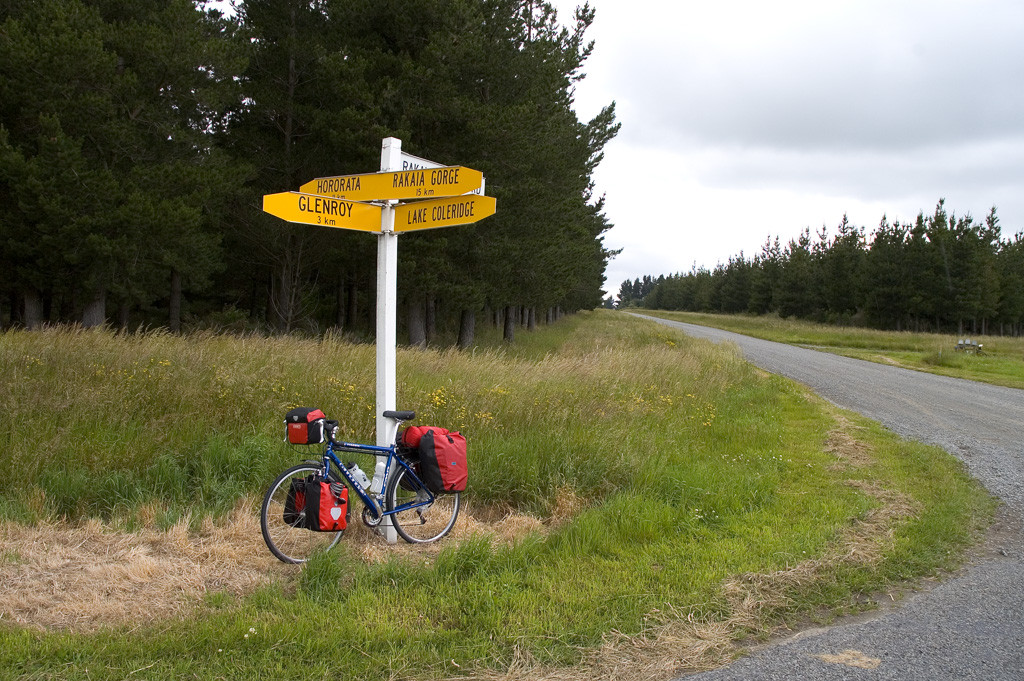 December 29, 2004 We arrived in Christchurch and decided to take a rest-day. We had been cycling five days and I needed a rest. I could have gone on for another day, but our schedule called for another four days of cycling, which seemed a bit much. Besides, Christchurch is a decent size city, so it seemed appropriate to spend a day here and explore the town.

We managed to find a hostel for the extra night and to rearrange our reservations for the next few days. Since Christmas is the height of holiday season in New Zealand, we had made sure to book accommodation for the first 10 days or so before we left Canada. In Christchurch we enjoyed sleeping in, did some sightseeing, visited the Art Gallery and ate some great Indian food.

December 31, 2004 we left Christchurch and headed out to Methven. Methven is not an exciting town this time of year, since it is primarily a ski town and there is little skiing to be done in the middle of summer, so it was almost deserted. However, we had to stay somewhere enroute to Lake Tekapo, and Methven it was.

The road was pretty easy in that it didn’t contain any major climbs. However, it did have what the book described as ‘an almost imperceptible ascent’. Well, our eyes may not have perceived the ascent, but our legs sure did. Most of the time the road was long and straight and we just kept cycling to the horizon. We didn’t realize how much we had ‘imperceptibly’ climbed until we reached the Rakaia Gorge near the end of the day. It was a beautiful spot. Unfortunately, it had rained hard as we approached the gorge, so there was no good opportunity to take pictures.

Of course the problem with going down into a gorge (great!) is that we had to go up again on the other side after we crossed the bridge. The first 150 meters were so steep that we had to walk. Then it was only another twelve easy kilometers into Methven. This time the road had an almost imperceptible descent. That means, you think you’re on a flat road but the cycling is easy and you go very fast. You feel like superman or superwoman, but deep down you know that it is because the road goes slightly down hill. But we loved it and it made up for the steady slog earlier that day. 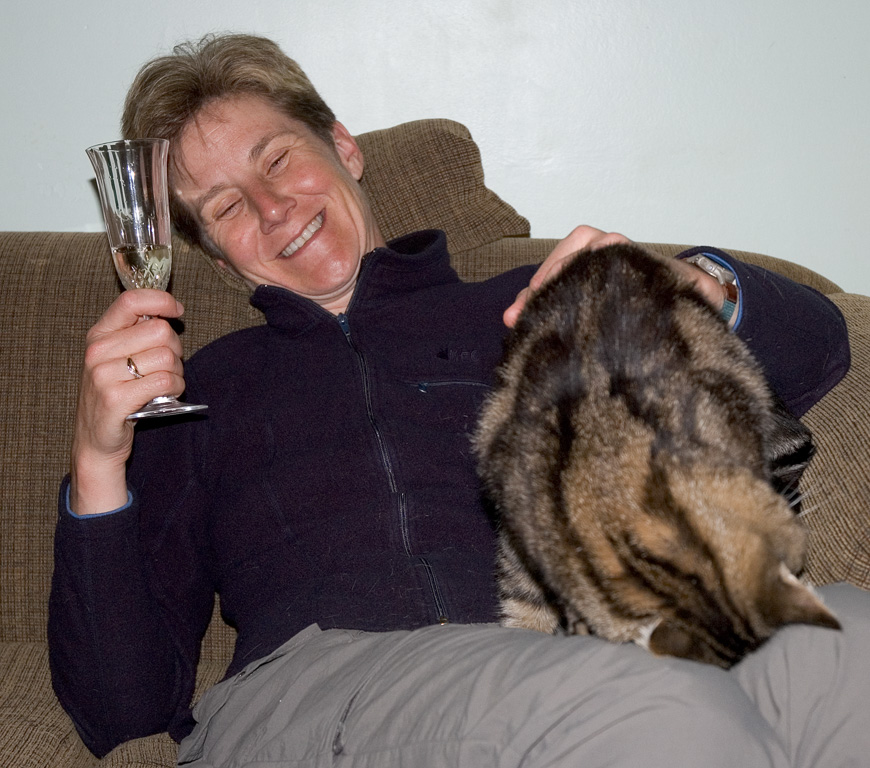 December 31, 2005 In Methven we were booked at a backpackers, the Alpenhaus. When making the reservations the owners had mentioned they would be away and someone would be looking after the place. That seemed fine and we didn’t give it much thought. As it turned out, the backpackers was officially closed and the owners had left us the key under the ‘Welcome’ sign and we were to make ourselves at home. That was different. The only living creature around was the cat, who seemed hungry and starved for company. Being a backpacker’s cat I’m sure it is used to having lots of people around and it must have felt lonely with everyone gone. Supposedly someone came by every day to feed it, but we had our doubts about that, so we filled its food dish that night and again the next morning before we left. While we were home the cat stayed with us and slept with us on our bed.

We had New Year’s Eve dinner at one of the two pubs. Basic food, but not bad. We chose a red wine, Roy’s Hill. With a name like that, we had to try it of course. It was o.k., but not great. Sorry Roy. Around 8 p.m. we left the restaurant (it closed at 8.30) and decided to buy our own bottle of bubbly and head back to the hostel. The atmosphere in the pub was depressing, especially when a family of about 10 people showed up, including four young children. As soon as they walked in, the adults decided to skip the dinner part and just head for the pub instead, leaving the kids to themselves. It was a sad sight. So home we went. We watched a review of 2004 in New Zealand on tv while sipping our bubbly and enjoying the company of the cat.

January 1, 2005 New Year’s day we cycled to Geraldine. It stayed dry and although cooler than it ought to be, the weather was nice. However, clouds piled up and during the night we could hear the rain. By the time we got up, it was raining hard
Fortunately we were staying in a motor camp where we had our own cabin, with bathroom, and a heater. So we were snug as a bug. 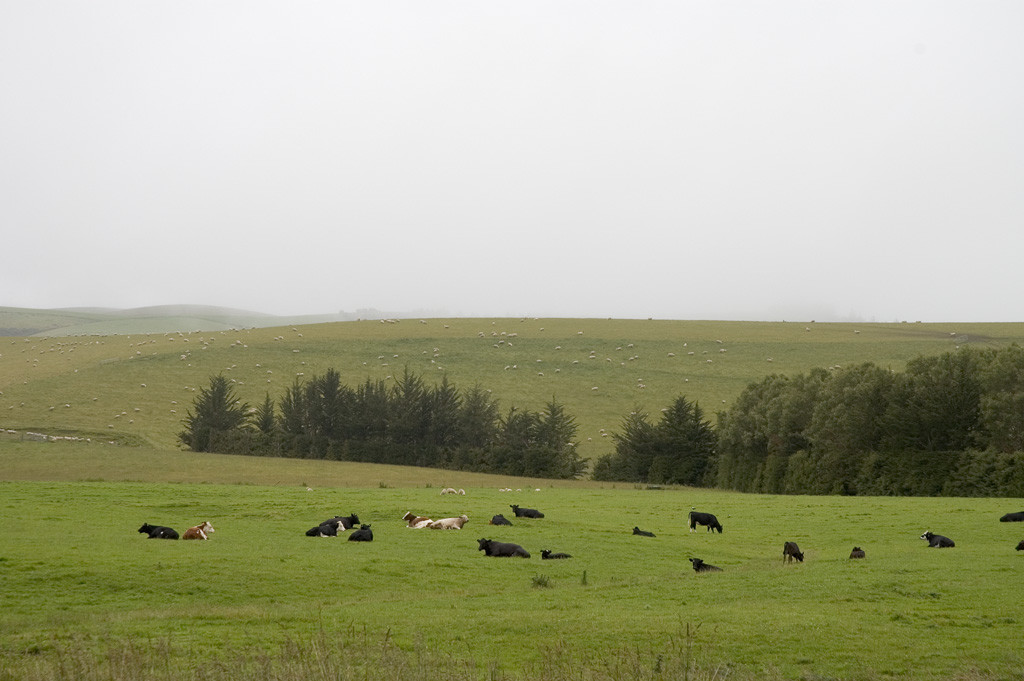 January 2, 2005 However, heading out from Geraldine, it was cold and very wet. Until now the temperatures had been pretty good, so that even if it was overcast or raining, we stayed warm. But this morning it was cold! We were looking forward to warmer weather and sincerely hoped that everyone’s assurance that it would be sunny in Lake Tekapo would hold true for us. 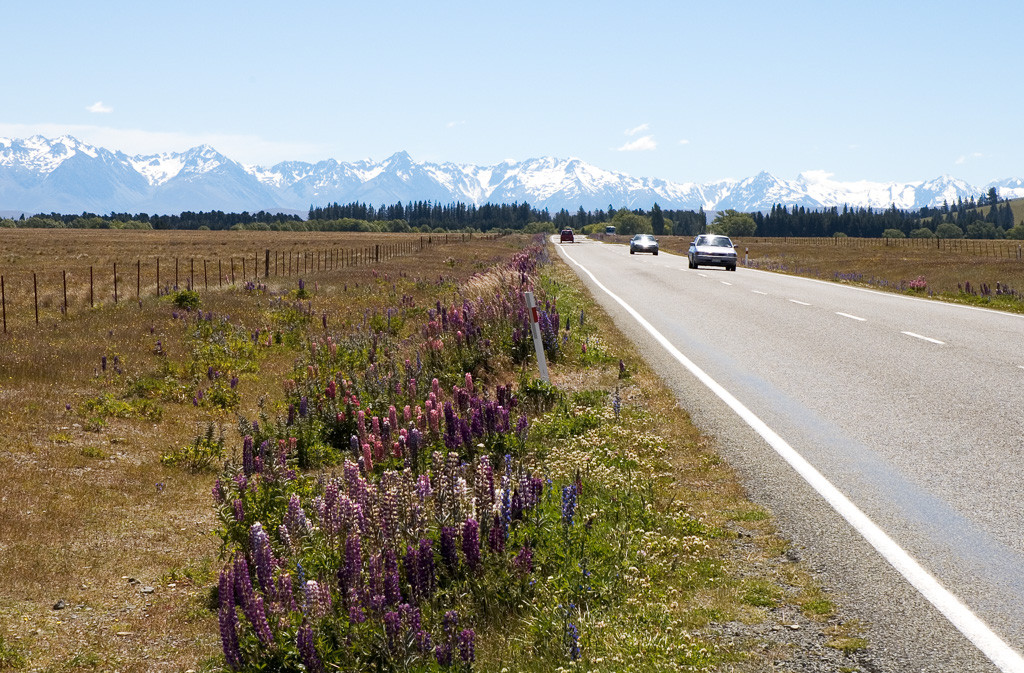 We had one or two good climbs enroute. One of our last stops was in Burke Pass, just before the last climb to Lake Tekapo. We could see blue sky just at the other side of the mountains, so things looked promising. We steadily cycled up the hill and indeed, there was a different world on the other side of the pass. 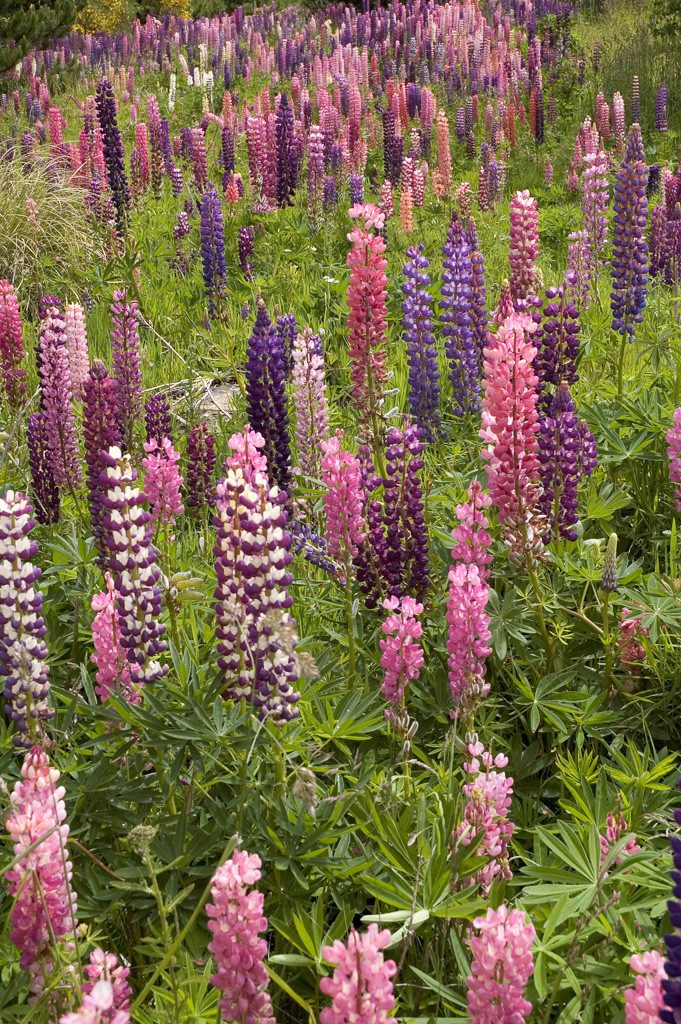 As soon as we got to the top, the clouds disappeared, it was warm, and a flat road stretched ahead of us, reaching into the Southern Alps. The road was lined with lupines in all shades of pink and purple. The rain and cold was soon forgotten. Cycling this stretch felt like cycling in God’s country; it more than made up for the struggles of the last two days. 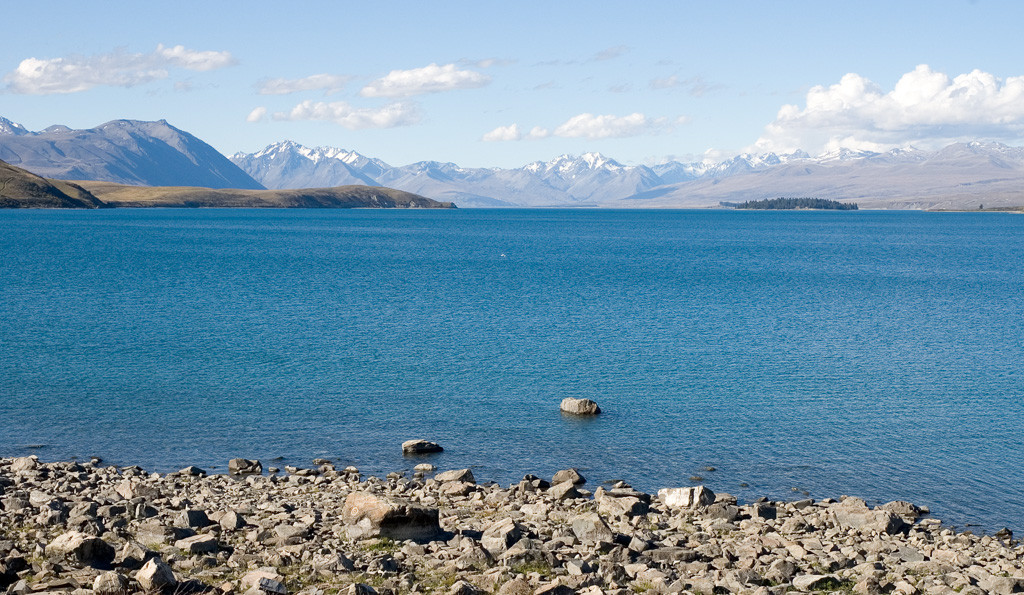 The sun and warmth in Lake Tekapo felt wonderful. The contrast in landscape was amazing too and not unlike that of the Okanagan in BC. One minute you’re in mountains with trees and suddenly you are in a completely different, much warmer and more barren landscape. 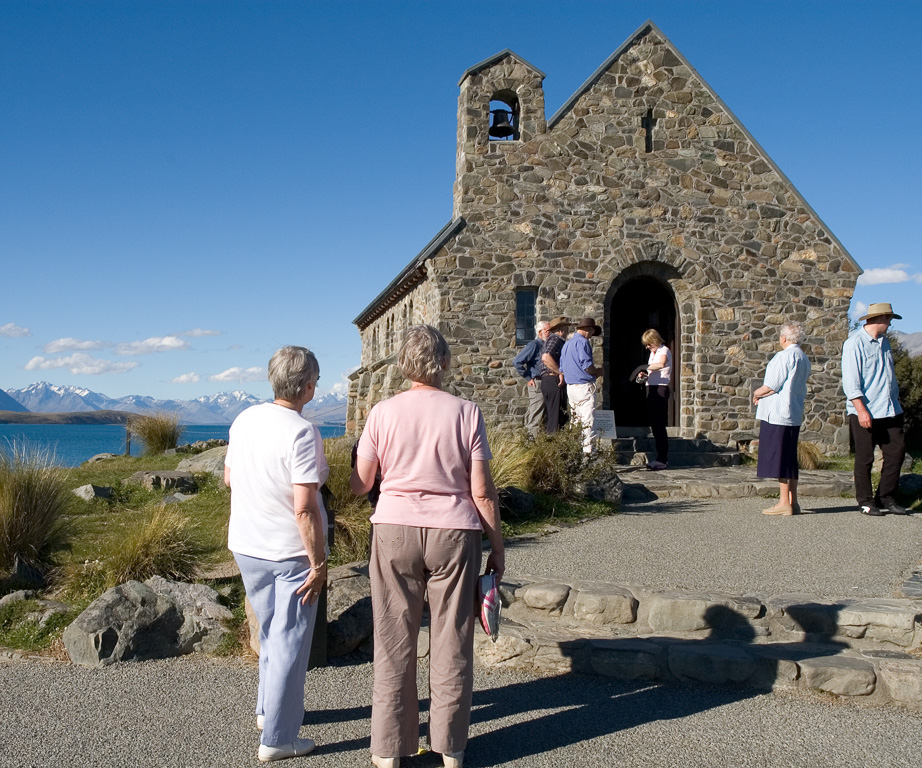 The little church has a great view because  it looks out over the lake. A service was just about to start when we got there, so no opportunity for a picture. But as one of the members of the congregation confided: with a view like that, you never worry about a dull sermon. 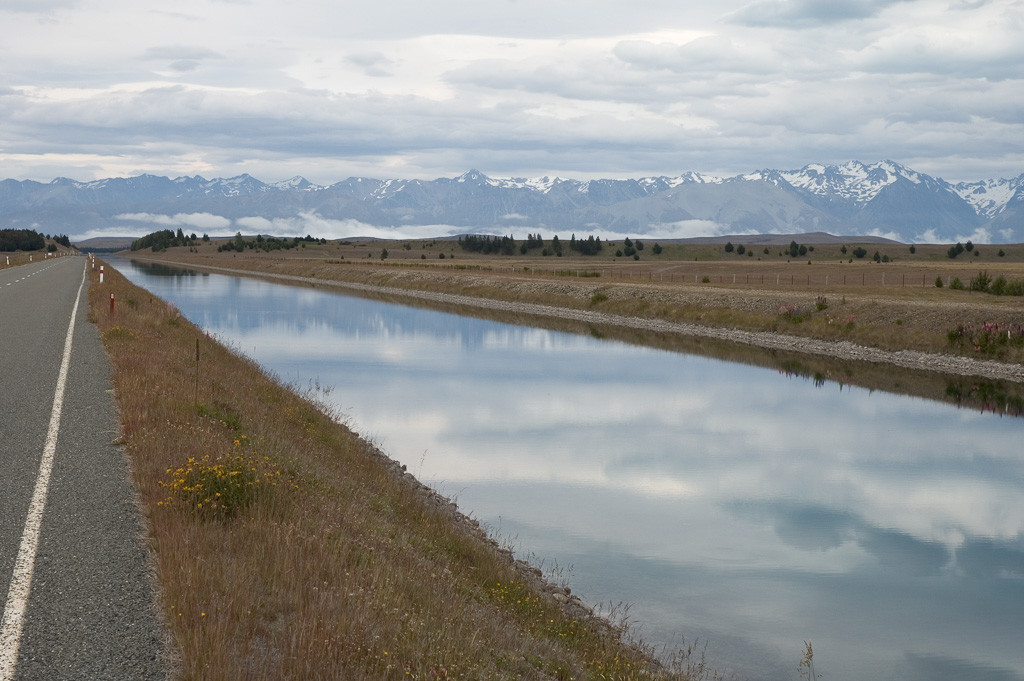 January 3, 2005 The next day we started heading towards Queenstown, via Omarama and Cromwell. The clouds from the previous day had followed us, but it wasn’t raining and the shade from the clouds was welcome.

Since New Zealand is not very densely populated, there generally are few choices of roads to get somewhere. This can be tricky when cycling, because you often end up on the main highway.

Fortunately, we found a road that runs along a canal for a power dam at Lake Pukaki, which meant it had a steady grade and was going down. We opted for this road rather than the highway for the first part of our trip. 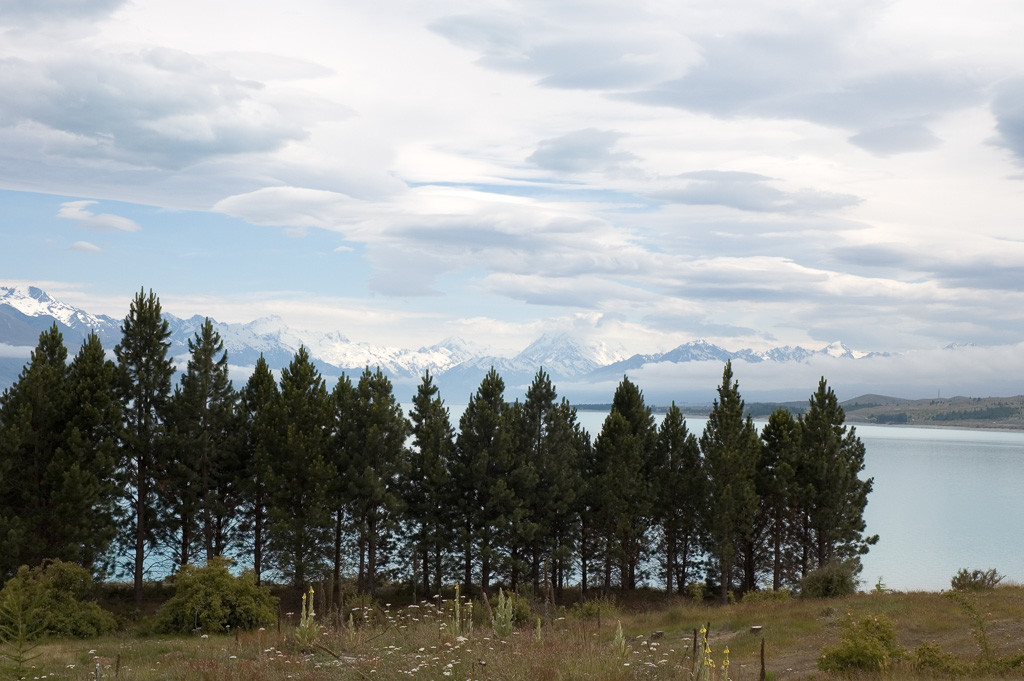 Once we joined the highway 8 again, we head due south and stopped in Twizel, one of the few towns on our route, for some lunch. There we met two fellow cyclist, a couple from Holland, who were touring New Zealand for a couple of months and were also enroute to Omarama. They had done several trips already, including a few months in South America a couple of years ago.